In what has become a something of a September tradition, Alcon invited members of the eye care press to their headquarters in Ft. Worth to update everyone on the most important developments at the company, and what you might see in the coming year.  I decided to take the trip to check out what was going on. 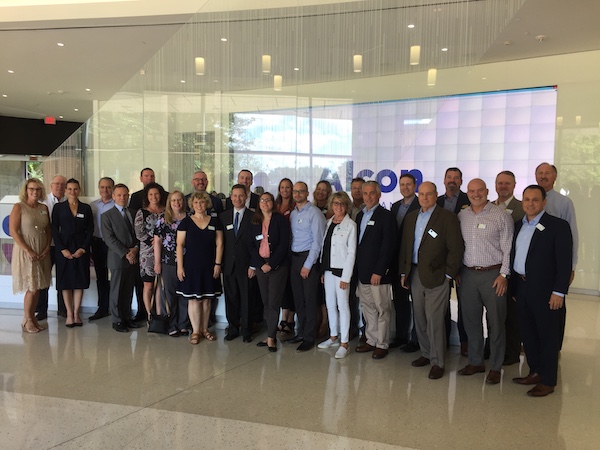 (this group of people is responsible for most of what you read about your chosen profession.. scary thought!)

Sergio Duplan, the President of Alcon North America, kicked off the presentations, and was followed by: the GM of Alcon US Vision Care, Sean Clark; the GM of Alcon US Surgical business, Jim Di Filippo; and a VP from their Medical Affairs division, Dr. Roee Lazebnik.

Here are my notes from the talks I thought ODwire folks would be most interested in. These are my totally biased opinions, mixed with some actual facts.
(Disclosure — Alcon provided a buffet lunch for all attendees, and invited everyone who stayed in Ft. Worth after the event to dinner.  Other than that, the trip was on our own dime…)

Those who have followed the company over the past decade or so know Alcon was acquired by the pharmaceutical giant Novartis, then last year was spun back out as an independent, publicly traded company.

In their time with Novartis, the company took on a “pharma mindset” — by their own admission, the company became slower, more cautious, and the red tape imposed by this orientation was noticeably greater then when Alcon was a free-standing company.

According to Duplan,  Alcon itself was competing against other divisions in Novartis for funding, which created additional challenges for the team.

With the spinout, that’s behind them. As a freestanding company, they have much more operational flexibility, and a 100% focus on eyecare. Which will make them faster, nimbler, and more able to respond to customers. So as a concrete example, they launched PRECISION1 and PanOptix Trifocal IOL years ahead of schedule. This is highly encouraging, and I look forward to seeing how things evolve over the next year.

2. Alcon Has a *GIGANTIC* Pipeline of New Products in the Works.

To give you a sense of the size of the company, Alcon does about $7B in sales each year (the entire market size is $23B).

They’re putting $2.5B to R&D over the next 5 years, and have over 100 projects in the R&D pipeline (sadly, they couldn’t discuss many of these projects, as many are secret…)

The R&D has yielded a bunch of new products, including 2 new CL platforms coming in the next two years. (Yes, DT1 Toric is on the way. No one would give me any real dates… so don’t ask  me!)

The key point they wanted to drive home is that the amount they are putting into R&D in eyecare dwarfs what other companies are doing. Which should lead to some cool products down the line.

3. PRECISION1 Launch: Aiming for the “Juicy Center” of the Market 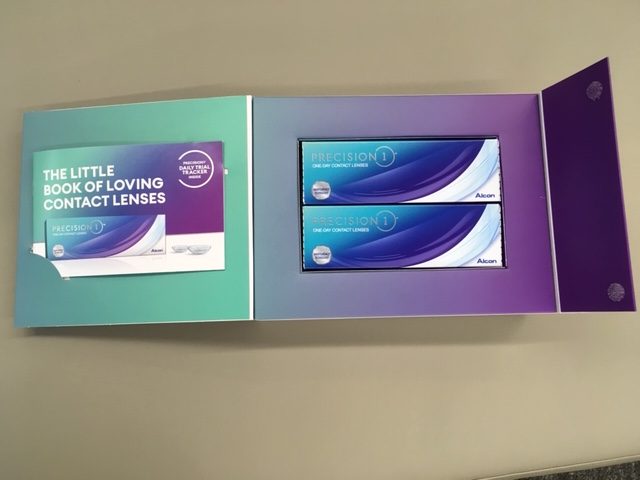 We have another discussion thread about PRECISION1, since I got to preview the lens at this past AOA. Suffice to say the lens is launching here in the US, and they are excited about it.

The important stuff you need to know:

* It is NOT just a DT1 lens — the design is a bit different, it handles easier (due to the slightly higher modulus and a different design), and the water gradient is less thick than DT1 (3 microns vs 6).

It also has a visitint, which DT1 does not. (I asked why DT1 doesn’t, the answer was “production reasons”. My guess? When DT1 was initially developed, putting on a visitint was the least of their concerns — this was an expensive lens to create and produce, the lack of a visitint wasn’t going to make or break the product.)

* Initial comfort for PRECISION1 was, to my eyes anyway, like a DT1. I’d be curious to see how it wears through the day & into the evening (sadly, i’m old, and these lenses are targeted at young people, so… no MF on the horizon for me to test drive.)

* As mentioned above, it is being marketed as a lens for new wearers, a more affordable, easier-handling alternative to DT1. The manufacturer obviously doesn’t set price, but expect a yearly supply to be ~ $630 ($200 cheaper than DT1), and at least $100 more than DACP.

* They see the PRECISION1 as addressing the large “middle market” of Dailies wearers. IE —

Dailies Aquacomfort Plus = “Value” lens
PRECISION1 = The Great Middle (60-80% of wearers)
DT1 = High End, for the most discriminating or people with ocular surface issues, etc….

My take? Over time, if they can lower the price further on PRECISION1 it is going to significantly erode market share from DACP.  PRECISION1 is, IMO, a better lens, and probably the one that most people are going to try as a starter if they fit Alcon’s lenses.

Mr. Duplan was refreshingly honest about the fact that they lacked a mid-level lens like this until now.

* They are also including lots of marketing materials with PRECISION1 fit sets, to help engage patients, and include tips for new wearers.

In no particular order:

* DACP Toric – they have introduced extended parameters to – according to Alcon – cover more than any other DD in the market.

* AirOptix for Astigmatism with Hydraglyde – Now available, improved comfort. So this means that Hydraglyde is now available across the AirOptix line. Which simplifies the message around the AirOptix brand, at least (though that name is still a bit of a mouthful!)

* DAILIES Colors now available – a great add-on for people who don’t want to wear colors all the time, but who are already wearing DAILIES.

* DT1 – I mentioned the torics will be here. Eventually… patience is required (think about the number of SKUs that need to be produced and inventoried, not just for a daily, but a daily toric. Makes my head hurt thinking about it. (Can I also start nagging for a toric MF now? no? ok…) 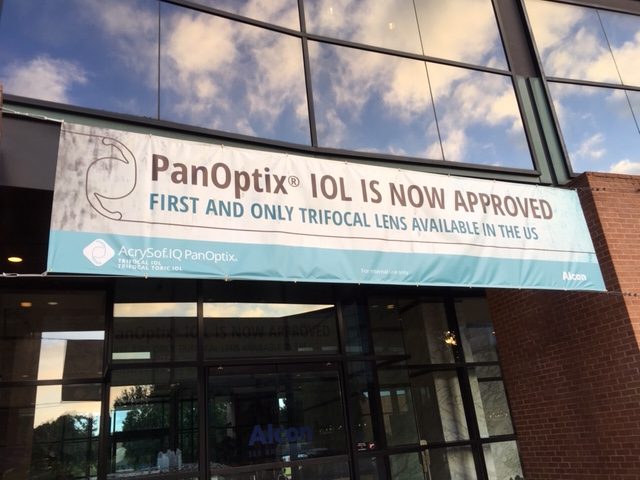 PanOptix is a surgical product, but IMO is an important one for ODs to be aware of.

* This product is new to the US, it is the *only* trifocal IOL on the market here.

* It is very different than any other lens on the market, I don’t understand the physics/optics, but suffice to say it is very difficult to get enough light through the lens when you split it three ways. They feel that it is a real breakthrough in cataract surgery. The surgeons who have worked with the lens have been enthusiastic so far, as have patients.

* The sticking point here is that patients need to be educated about this and other premium IOLs, and both OMDs and ODs aren’t doing a great job —

* Alcon did a survey and found that only 26% of patients feel educated enough before cataract surgery. 90% said they wanted more education! This isn’t good….

* To this end, Alcon is really pushing on education, and have created patient education materials, and social media programs to get the word out on these new IOLs.

* They’ve also created what they call the “Activate” Program:

I pressed their marketing staff on an important point:

Right now they are targeting most of their educational efforts at OMDs, however I strongly suggested that they expand this effort to ODs as well, since I know many of you make recommendations to patients about IOLs, and I think we’ve all heard stories about OMDs being so pressed for time that many don’t do a solid job of pre-op education.

How many of you feel that you were the ones that made an IOL recommendation?
Shouldn’t you be kept in the loop as these products advance? I think so, and I made sure to tell them!

6. The roll-out of iLUX continues, with Patient Care Kits 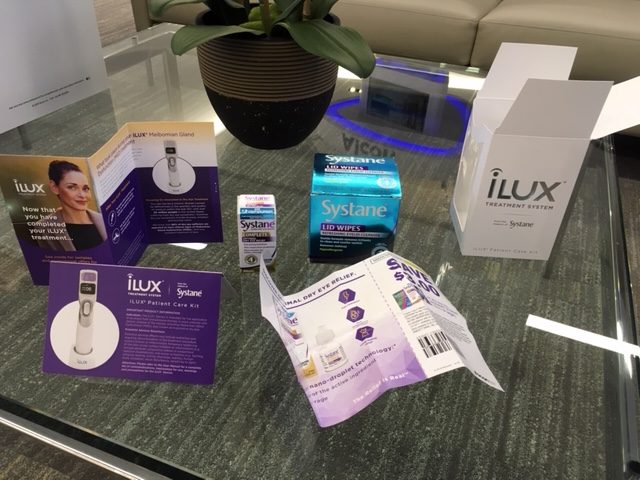 We brought you the story of Alcon’s acquistion of iLUX and their device for treating MGD back in June.

Their roll-out continues, and as we were in the media event, they just got their first batch of patient marketing kits back.

They don’t want iLUX to become an expensive paperweight or stuffed in a closet as has happened in the past with so many other promising devices,  so in addition to offering the “DEEP” program to help integrate the device into your practice’s workflow, they are now also offering these education kits to patients that come with literature and SYSTANE samples, to be used post-procedure.

You get 10 of these kits when you buy a set of tips.

7. There Have Been Advances in Topo-guided LASIK You Should Know

The ability to more easily treat high-order aberrations when undergoing refractive surgery has become a reality.

Part of the problem in the past was taking the output from a Ziemer Aberrometer or OCULUS Pentacam to find high-order aberrations and then properly programming the LASIK system (like Alcon’s own Wavelight Refractive suite) to correct them– it required the clinician to do a lot of math manually to figure out the forces to program into the treatment plan. Ugh!

Dr. Mark Lobanoff (whom, coincidentally, I went to med school with & lived with in the same house for a time – small world…) was fed up with the problem, and as Alcon told the (possibly apocryphal) story, he was hiking in the woods and came up with the solution — integration software he calls Phorcides.

It takes the output of, say, the Pentacam, and the patient’s manifest refraction, then uses vector analysis and mathematics to suggest treatments for folks with high-order aberrations (trefoil, coma, etc..). No muss, no fuss.

These refinements have led to improved results, and according to the folks at Alcon more people coming out of the procedure 20/15 than before.

So this is something to think about before sending a patient off for LASIK — if you have the capability to measure these high-order aberrations, you really should. Because at least a certain subset of surgeons will actively treat them with this new technology. (Alcon has entered into a licensing agreement to include the Phorcides software with their surgical suites, which should speed its adoption.)

Whew. That was a lot.

So that’s it for me from Ft. Worth. Feel free to provide feedback in this thread…. and I hope to see you at Expo West next week.

Registered users may discuss in our forum!

California Is The Place You Ought To Be
posted January 19, 2020 in Politics
View more threads